I’ve been building a library of books in English on Jewish monsters and magic. Here are the books I come back to over and over again. 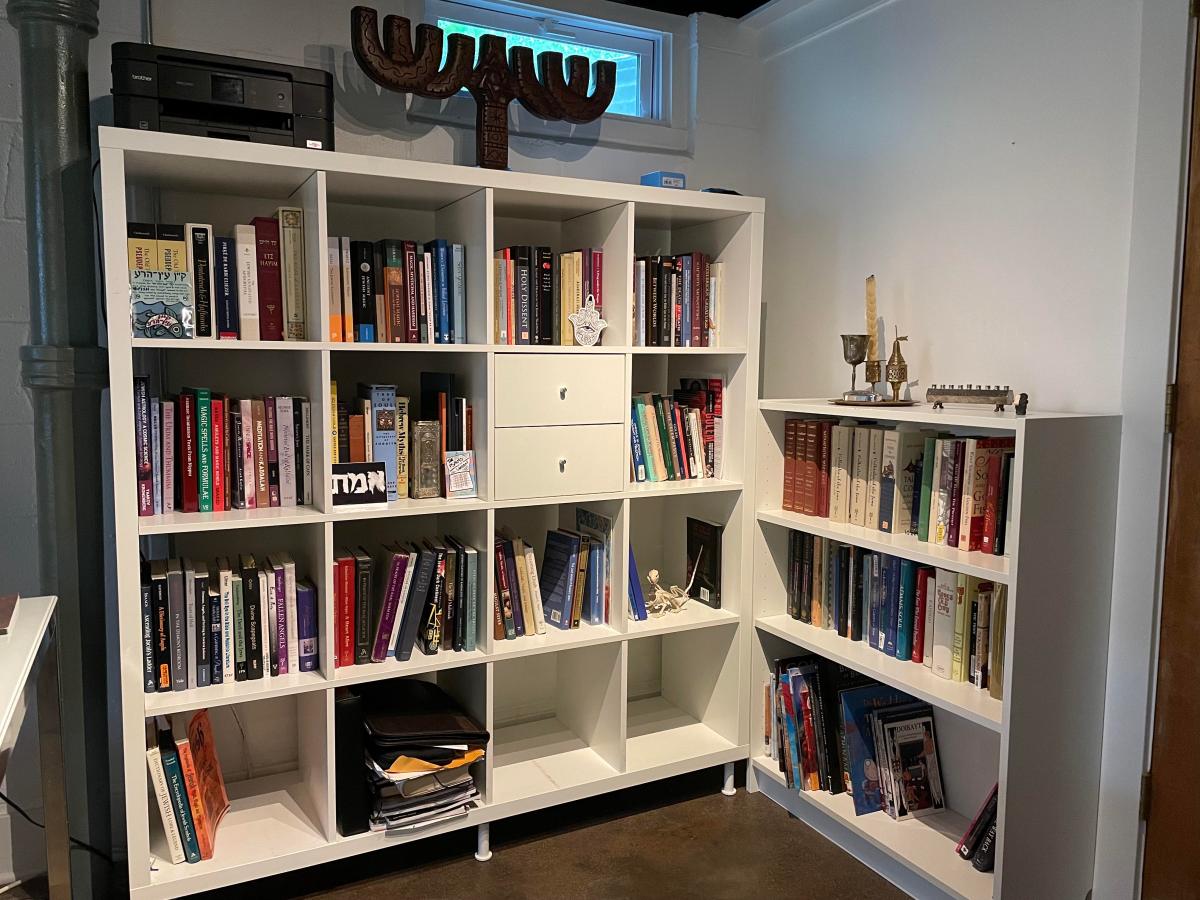 Jews are the People of the Book, right? So it figures that if you want to learn about about Jewish monsters and magic then you might want to grab a few. Over the last couple of years I’ve shared a few versions of a starter list. Over time it’s grown into this list here.

Two things about this list. First, the focus here is on books and articles written or translated into English. There’s lots more great stuff out there in Hebrew, Yiddish, Ladino, and Judeo-Arabic but I’m not able to cover that. I can’t do much past basic prayerbook Hebrew. Someday I’m going to fix that.

Second, the folks who’ve asked me for reading lists have done so for their own, and often very different, reasons and have needed very different lists. These have included:

Regardless of why you’ve found this list, I hope that you find resources that are useful. If you want a bigger list, I’ve got a LibraryThing list of all the books in my library. All sorts of wild stuff. For the articles, I’m only listing stuff that is easily available free online. Some of my favorite articles aren’t on the list beause they require JSTOR access. If you can’t find what you’re looking for, or want some help finding the right resource leave a comment on the page, or message me on twitter @adnesadeh and let me know what you’re looking for.

Some of the articles I list are posted on Academia.edu. Free registration is required. In most cases the books are easily available wherever you buy books. Most of my links will be to Bookshop.org, which helps you buy new books from local stores, or Alibris, which is a good used-bookstore aggregator site. In some cases, though, your best bet is to go right to the publisher. Some of these are kinda pricey academic books. But most aren’t.

I’m sure I’m going to update this occasionally. So check back. This version is dated Nittel Nacht (December 24), 2022.

Update 2. Dec 30 2022. Added essays on Jewish astrology, Jewish “superstitions” in the 1920’s, ruach ra’ah, the “last” Jewish demon (still actively included in Jewish ritual). and an amazing essay on the anti-demon aspects of Jewish weddings which includes a summary of the three main Jewish anti-demon strategies; fight, bribe, and conciliate them.

Check out Ezra Rose’s one page print & fold zines. They’re free or pay what you want.

Ezra has great art and stickers available too. Check them out!

Seferia.org – “Sefaria is home to 3,000 years of Jewish texts. We are a non-profit organization offering free access to texts, translations, and commentaries so that everyone can participate in the ongoing process of studying, interpreting, and creating Torah” While not everything at Seferia is translated into English, a lot is. I pretty much live there. Tanakh, Talmud, later writings, dictionaries. Everything crosslinked to commentary. So many wonderful texts. Also check out their Source Sheets, which Seferia users put together on interesting topics. To get you started, here are 5 sources.

Jewish Views of the Afterlife by Simcha Paull Raphael. “Jewish Views of the Afterlife is a classic study of ideas of afterlife and postmortem survival in Jewish tradition and mysticism. As both a scholar and pastoral counselor, Raphael guides the reader through 4,000 years of Jewish thought on the afterlife by investigating pertinent sacred texts produced in each era.” Another must read.

Final Judgement and the Dead in Medieval Jewish Thought by Susan Weissman. “Through a detailed analysis of ghost tales in the Ashkenazi pietistic work Sefer Hasidim, Susan Weissman documents a major transformation in Jewish attitudes and practices regarding the dead and the afterlife that took place between the rabbinic period and medieval times.” Ghosts. The walking dead. Here it is folks.

In Praise of Baal Shem Tov (Shivhei Ha-Besht: The Earliest Collection of Legends about the Founder of Hasidism) – “In Praise of the Baal Shem Tov is the first complete English translation of the tales surrounding the Besht, a rabbi and kabbalistic practitioner whose teachings bolstered the growing Hasidic movement in the eighteenth century.” He also fought with sorcerers and werewolves, wrote amulets and recommended healing practices.

Without Bounds: The Life and Death of Rabbi Ya’aqov Wazana. “Without Bounds illuminates the life of the mysterious Rabbi Ya’aqov Wazana, a Jewish healer who worked in the Western High Atlas region in southern Morocco and died there in the early 1950s. Impressed by his healing powers and shamanic virtuosity, Moroccan Jews are intrigued by his lifestyle and contacts with the Muslim and the demonic worlds that dangerously blurred his Jewish identity.”

There’s a lot of great material out there and a lot of weird stuff that I stay away from. Here are a few bits I know about and want to share. This list is also really short on rabbinic material. I need to fix that. I’ll cover Jewish monsters and magic artists in another posts.

Great Myths and Legends: The Queen of Sheba in History and Legend and Great Riddles in Archaeology: The Ark of the Covenant: Lost, Found, or Forgotten? – Annette Yoshiko Reed. I haven’t watched these yet but they’ve been on my list.

An Expert Explains – How to Make a Golem – Alana Vincent. I havent watched this one either, but it’s been on my list.

The Dybbuk: The Full Original Film and Story

Tahdid Sword Ceremony for the Brit Milah in Morocco. Posted by the Jewish Learning Channel. A lot more info is provided by the website https://yalalla.org.uk/ in the article “Jewish Saharans Singing To Birth”

“The word Tahdid comes from hdid, metal, in Arabic, bringing in technologies of metallurgy to protection rituals. The women used to hold the mother and baby ‘hostage’ in the room and barter jokingly with the men who were knocking at the door and begging to come in. Joking negotiations back and forth in Judeo-Arabic were meant to make everyone laugh and ensure that everyone knew where the real power was! Once allowed into the mother’s room, the men sang liturgical poetry in Judeo-Arabic and Hebrew, lightly tapped ritual swords against the walls of the four corners of the room, on the baby’s crib and on the four cardinal points, all the places where the evil spirits are said to hide. They then continued singing mystical poems and murmuring prayers in Hebrew and the women finished with loud yuyus of celebration. Afterwards there is a feast for everyone gathered. This Tahdid, from July 2013, was led by the paytan Jacob Wizman, a student of the famous Rabbi David Bouzaglo. Filmed in Casablanca by Ron Duncan Hart.”

According to Jewish tradition, the world around us is filled with demons, ghosts, giants and angels, and creatures of all types. But the Judaism I was raised with downplays and rationalizes them away, to the point where they’re just forgotten dusty metaphors. They won’t go away, though. It’s impossible to read the Torah, the Talmud or any of the commentaries without being constantly reminded of them. And they still have lessons to teach us, whether or not you believe in them or not.

For millenia, Jews have lived with these creatures and have had practical means for coping with them. Avoid the wilds. Wear iron when you travel between cities. Place jam on a plate and leave it to be found. In this blog, I’m hoping to piece together this legacy from original sources and contemporary scholars. And, hopefully, to learn more deeply what it means to be Jewish, to love Torah and to understand God. And to have a lot of fun fighting monsters. Or, at least, learning how.